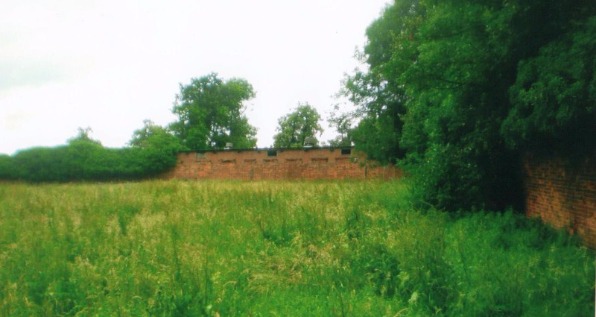 Fisherwick and the history of Woodhouse Farm

The picture above is the walled garden prior to replanting. Having been used for grazing since the mid sixties the garden had become overgrown once the cattle had gone. The garden, like the rest of the farm, hid its former affluence and landscape designer history very well.

Fisherwick  from the Old English for fisherman's dwelling) was first recorded as a manor in 1167 but evidence has suggested the possibility of a Neolithic settlement, and evidence of Iron Age activity and a Roman-British farmstead in the area, though it is not mentioned in the Domesday Book.

In the twelfth century Fysherwyck was in the possession of the Walter Durdent, Bishop of Lichfield and Coventry, it passed through the Durdent Family with one Roger Durdent living there in 1296.

In 1450 it was  granted to the Skeffinton Family who built a 'very proper brick house' which was actually a fine Tudor mansion. Members of the Skeffington Family resided in Fisherwick until 1756 when the mansion was sold to Samuel Swinfen of Swinfen. The mansion was subsequently sold again and had two further owners before Swinfen repurchased it before selling in 1761 to Arthur 5th Earl of Donegal.

Arthur Chichester (1739-1799) an Irish Peer who would later become Baron of Fisherwick and Marquess of Donegal decided to use his income from tenanted land in Ireland to create a magnificent estate in England for his home. After only five years the Earl instructed Lancelot "Capability" Brown to redesign and remodel the house and parkland. Brown took the Tudor house and created a larger Palladian mansion, removed formal tree lined avenues, designed  a natural parkland with the addition of a great lake, and planted 10,000 trees. Brown's plans also included stone lined ha-has - a feature he liked to include as they were less intrusive than fences and walls.

This magnificent estate was unfortunately not to last with the Marquess's death in 1799 the estate pasted to his younger son Lord Spencer Stanley Chichester who sold it to clear family debt. Unfortunately the estate could not be sold as one piece of land and was divided up into nine farms with Woodhouse being one of them.

The walled garden at Woodhouse continued to supply produce to the Howard Family over in Elford for a short time but by the end of the 19th Century maps show only an orchard in the garden and no formal beds.

In 1936 Woodhouse and other dwellings and land were part of a charitable donation given by Francis Paget Howard for the healthful recreation of the people of Birmingham and so the Elford Trust was created. It was this one act of kindness that actually kept Woodhouse and the parkland around it safe as most of the land which had once made up the Fisherwick Estate was used for gravel workings and agriculture.

Woodhouse has been home to many tenants over the years until becoming the home of Edith and Trevor Stone and later to my husband Andrew. A small but beautiful farm, though the years had taken their toll on buildings and the people who farmed the land. Trevor's death in 2007 brought things to a head and ignited once more the passion in Andrew and myself - we wanted to see the farm used as it had been intended - for the healthful recreation of people.

Supported by the community around us, the farm was once again stocked with Gloucester Old Spot Pigs, chickens, and Irish Moiled Cows. Andrew very much wanted to be a farmer but supported by long term friend Allan Hayes the walled garden was ploughed for the first time in nearly forty years divided up into four beds, trees planted back against the walls and the garden was given a new lease of life.   2010 had also seen Woodhouse host a project run by Staffordshire Care Farming and Development CIC working with people recovering from mental health issues called WELLIES.

2011 saw Annamarie and Andrew give out their first community supported agriculture veg share. Work started on our community building with the removal of the pigsties and decoration.

In 2012 our focus was on allowing people to enjoy the space, planting continued in the walled garden and the cider orchard was planted on a very sunny but cold January.

2013 saw yet more change as it seemed the idea of the community group being the "middle men" between Birmingham City Council and tenants Andrew and myself, was not working. The decision was made to close the IPS and create a new Community Interest Company with myself, Andrew, Allan Hayes (a long term supporter of the project and volunteer in the garden, working wonders with the fruit trees and bushes.) and Nick Platt (another long term supporter helping on a more policies and health and safety front but never happier then digging something up or cutting something down) as directors working directly with Birmingham Council.

2014 saw Woodhouse Farm and Garden CIC start its first year of trading, projects such as Staffordshire Care Farming and Development CIC's WELLIES have continued to be hosted here, local Brownies, Guides, Cubs continue to visit and volunteer. It also saw a rise in visits from Garden Guilds, WIs and walking groups it is our hope as facilities improve we hope to share our little piece of history with more people.

2016 saw us complete the refurbishment of the first quarter of the community building (Project Pigsty) with the addition of toilets thanks to The Lottery, a new roof thanks to our own fund raising, and funding from Severn Trent, Whittington and Fisherwick Parish Council and Central England Co-op. It also saw us being involved in the 300th anniversay elebrations for Capability Brown including special Heritage Open Days supported by The Heritage Lottery, Capability Brown Festival and The Landscape Institute.

All that is left for me to do is to thank all those who have been involved, visited, bought a packet of sausages or a cake from one of our fund raising stalls and here's to seeing you again soon.

We are open from 11am-4pm on Fridays and Saturdays.
Our new season CSA is under way. In addition to spring greens and cabbage, members have enjoyed rhubarb, gooseberries, fresh peas radishes and broad beans, and more recently new potatoes and lettuce. Plus much more. Don't miss out on your share of fresh locally-grown fruit and veg!
You can't beat our  Woodhouse Rare Breed Irish Moiled Beef and home grown, free range pork. If you've not tried it yet, why not place your order by sending a message via the our produce page?

Are you looking for a venue to hold your own events? From weddings to meetings and high teas our welcoming Community Room The Pigsty is available for hire at affordable rates. Send us a message to enquire about prices and availability.
We are very proud of our free range pork products which are prepared on site by Annamarie. Our range include a wide variety of sausages made with organic bread crumb and spices, no additives and no sulphides; plus gammon and pork cuts and joints including belly pork, chop, steaks and gammon. Oh and don't forget the bacon for sarnies!

Come along to the farm on Fridays or Saturdays 11-4, for a coffee and to purchase a selection of seasonal farm produce.  Don't forget to say hello to the animals and have a walk around the walled garden. You're very welcome!